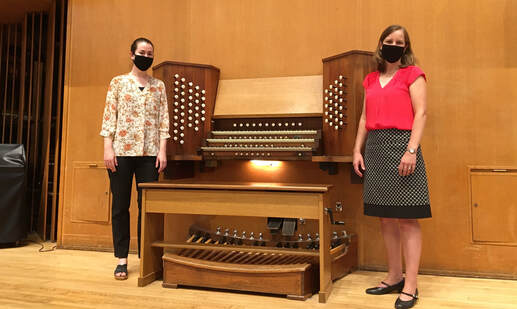 "This summer, Anne Laver (professor of organ) and Natalie Draper (professor of composition/theory) at Syracuse University in New York have been working on an initiative to demystify the organ for contemporary composers. The project began as a straightforward idea — they wanted to have a festival celebrating contemporary organ music at Syracuse University. They planned a series of panels relating to organ composition topics, a reading of new works, and a culminating concert of contemporary organ music. "Composing for the Organ: Webinar and Virtual Concert" is a one-day festival of contemporary organ music on September 12, 2020, and is free and open to the public. This article reflects on their experience researching, preparing, and composing a new organ work for this event." (Read more by clicking the link above.)
Article in I Care If You Listen written by Lior Willinger, highlighting his Active Listening Project and Natalie's "Until there is nothing left" (2019) 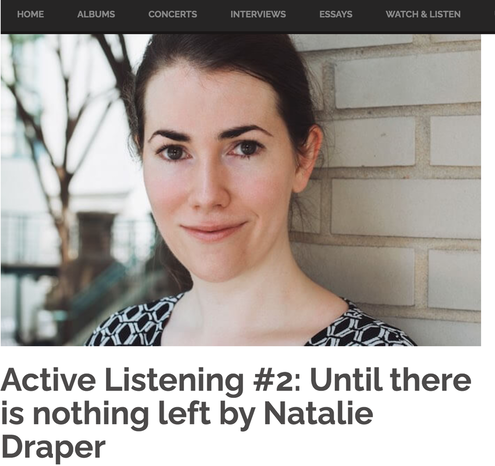 "Trees make life possible. They give us shade and oxygen. They prevent flooding and soil erosion. They provide a home to wildlife. They combat climate change by storing carbon. The New York Times recently reported on a study published in the journal Science Advances, which “found that better management of forests, grasslands and soils in the United States could offset as much as 21 percent of the country’s annual greenhouse gas emissions.” Obviously, we should try to protect trees, right? Seems like a simple equation, but money and greed tend to compute differently.

In live performances, Until there is nothing left is meant to be played alongside satellite imagery from NASA which reveals the effects of deforestation in the Mato Grasso region of Brazil. The time-lapse, which starts in 1984 and progresses to 2018, was assembled by Dr. Lauren Andrews, a NASA employee and college friend of the composer." (Read more by clicking the link above.)
Interview in VAN Magazine, written by A.Z. Madonna (2016)

"When I thought of who I would Intro, Natalie Draper immediately came to mind. I spent the summer of 2015 in the mountains of Western Massachusetts as the Publications Fellow of the Tanglewood Music Center, and Natalie was a Composition Fellow. The majority of my memories of Natalie are underlaid by an engine’s rumble; the girls’ school where the Fellows were housed was miles from Tanglewood itself, and I spent many sleepy-eyed mornings riding there in what was affectionately dubbed the “Natmobile,” chatting about teaching, feminism, how to make a living in unforgiving fields of work, and all sorts of other things. We rode south together when the Center closed for the summer, and listened to Meredith Monk and Fiona Apple with the sun glaring off the side mirrors." (Read more by clicking the link above.)
Proudly powered by Weebly